The “guar”, Colombian midfielder of Inter, on the evening of Friday, September 25 at the hall of honor of the Poli Hotel San Vittore Olona, ​​officially unveiled its new website.
An attractive graphics, several sections with news, trivia, biography and statistics, pictures, videos, a very important social project, and much more, including the first “contest” for the fans and the upcoming online store with the personal line of merchandise.
In front of the cameras of Mediaset, Sky, Inter Channel in the presence of a large troop of journalists and experts, including some of the big league as teammates Icardi and Murillo and with fellow Zapata and Berry, Fredy Guarin has shown value and importance of the new project, supported by none other than President Erick Thohir, which has recorded a video message and good wishes from coach Roberto Mancini, who attended the conference along with the trust Dejan Stankovic. In short, a real success, immediately stormed by millions of supporters, it just needs to look around and, above all, follow the new site … www.fredyguarin.com 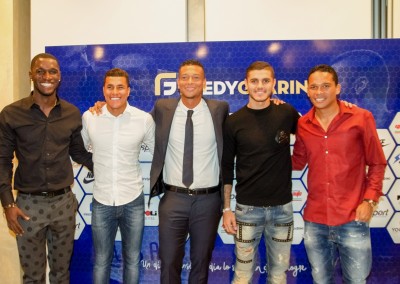