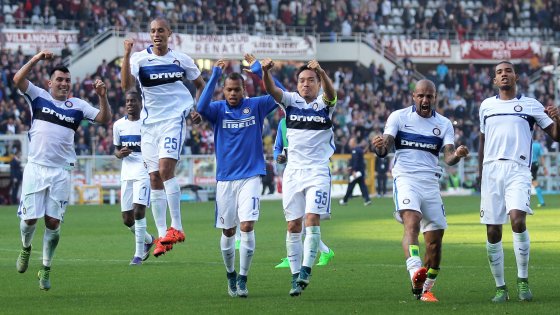 IDecides the match the first center in the league of Kondogbia
The sky is always Inter. The Inter beat Torino away, and it therefore maintains the lead alone in the Italian league. A meeting to decide the network Kondogbia that allows the team to Roberto Mancini to win the sixth consecutive helpful and the third win in a row. At Olimpico of Turin just a goal from French midfielder, in his first mark in Serie A. No way, then, for the grenade hosts who tried to the last draw, however clashing against a defense of iron and a super Handanovic.
The challenge starts now with a chance for the Nerazzurri: cross Kondogbia, Felipe Melo supports for Icardi’s header, however, his shot whistled just wide. The hosts responded to the 20 ‘with a shot from distance by Bruno Peres that ends high over the crossbar. They insist the grenade which 29 ‘approaching the mark with Benassi whose shot hits the crossbar from the frontline. They share the Nerazzurri: Glik stopped with a foul Icardi, and developments of punishment Kondogbia, leveraging the bank of Palacio, invents a left that leaves no way to Padelli. Torino responds with an attempt to Belotti anything but dangerous.
To start shooting the Turin close to equalizing but Inter relies on a resounding Handanovic: Inter goalkeeper first closes the door on the volley by Quagliarella and then repeats the conclusion of sub Belotti. With the passing of minutes the hosts increased the offensive pressure but Inter close properly. Attempts to Quagliarella and Maxi Lopez always crashing on the Maginot guest playing with diligence and attention. At 79 ‘tries Quagliarella, it served as Baselli, but the turn of the attacker finds ready rejected by Handanovic. Inter is still the number one providential sull’insidioso inserting Vives that, in fact, put an end to strife and allow Inter to keep the top ranking.